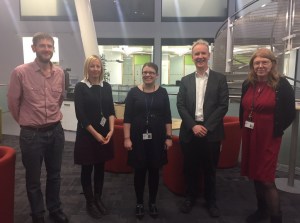 Notes on surviving a viva

This post originally appeared on my personal blog at http://shiftandrefresh.wordpress.com.

Last month, I had my viva – and passed! I have some minor corrections to do, including expanding on certain points and typos, but I was very pleased with the outcome. It’s an enormous relief when you have been worrying about it on a daily basis for literally years!

I had found it quite hard to get started with ‘viva prep’ – when faced with being asked about anything in or related to your thesis, I found it quite difficult to find a starting point. I began preparing properly for the viva a month before it.

I read a lot of guides online – some helpful, others not so much! – and took the advice of one to be strategic and think first about what you would consider to be the worst possible questions. Don’t do this! I thought myself into a deep dark hole in the first week. But on the positive side, at least I did have answers in mind if those questions had come up (they didn’t).

Martin organised a mock viva for me, about 2.5 weeks before the event, which I found really helpful. I was better at answering questions about specific details rather than bigger picture questions (e.g. ‘what have you done that warrants getting a PhD?’). This might have been due in part to the negative thinking in the previous week, but was very useful as it helped me get into the ‘viva mindset’ and helped me focus in terms of where I need to think about sharpening up my thoughts. After this, I mainly used my preparation time to (i) re-read my thesis several times, (ii) make ‘talking points’ for key messages from each chapter, and (iii) made sure that I had thought about what I would actually say in response to the full range of potential questions (Rebecca Ferguson’s list of 40 viva questions helped guide this).

By the start of viva week, I felt that I had prepared for most of the things that could be expected in advance, although it’s not the sort of thing that you can ever feel 100% prepared for as there is always the feeling that something totally unpredictable could happen. But, you are the expert – no-one knows your research or your thesis as well as you do. My viva was on a Friday, so in the week leading up to it, I tried to include a bit of relaxation time too and trying to stay positive as well as mainly re-reading my notes. I made a Spotify playlist of self-confidence-boosting songs and made a point of getting fresh air. I think it worked (‘Close to me’ by The Cure and the theme tune from Rocky proved most effective!).

On the day, I made a point of having a decent breakfast, because I was sure I wouldn’t want lunch. It started at 2pm and the discussion ran until 4pm – it is amazing how quickly the time goes by though. I wasn’t even aware of the time until about 3.30pm. Two things which people had told me but I didn’t really appreciate beforehand were (i) that the examiners usually do want you to pass – they’re not necessarily going to be out to trip you up!, and (ii) it is actually quite enjoyable – you really don’t get many chances to have such an in-depth discussion about your research with experts in your field. I had been worried that it would turn out to be a sort of ‘live action peer review’ – which in a sense it was, but entirely reasonable and constructive. It was quite a surreal day, the combination of worry, relief, excitement and exhaustion, but I don’t think I will ever forget it.