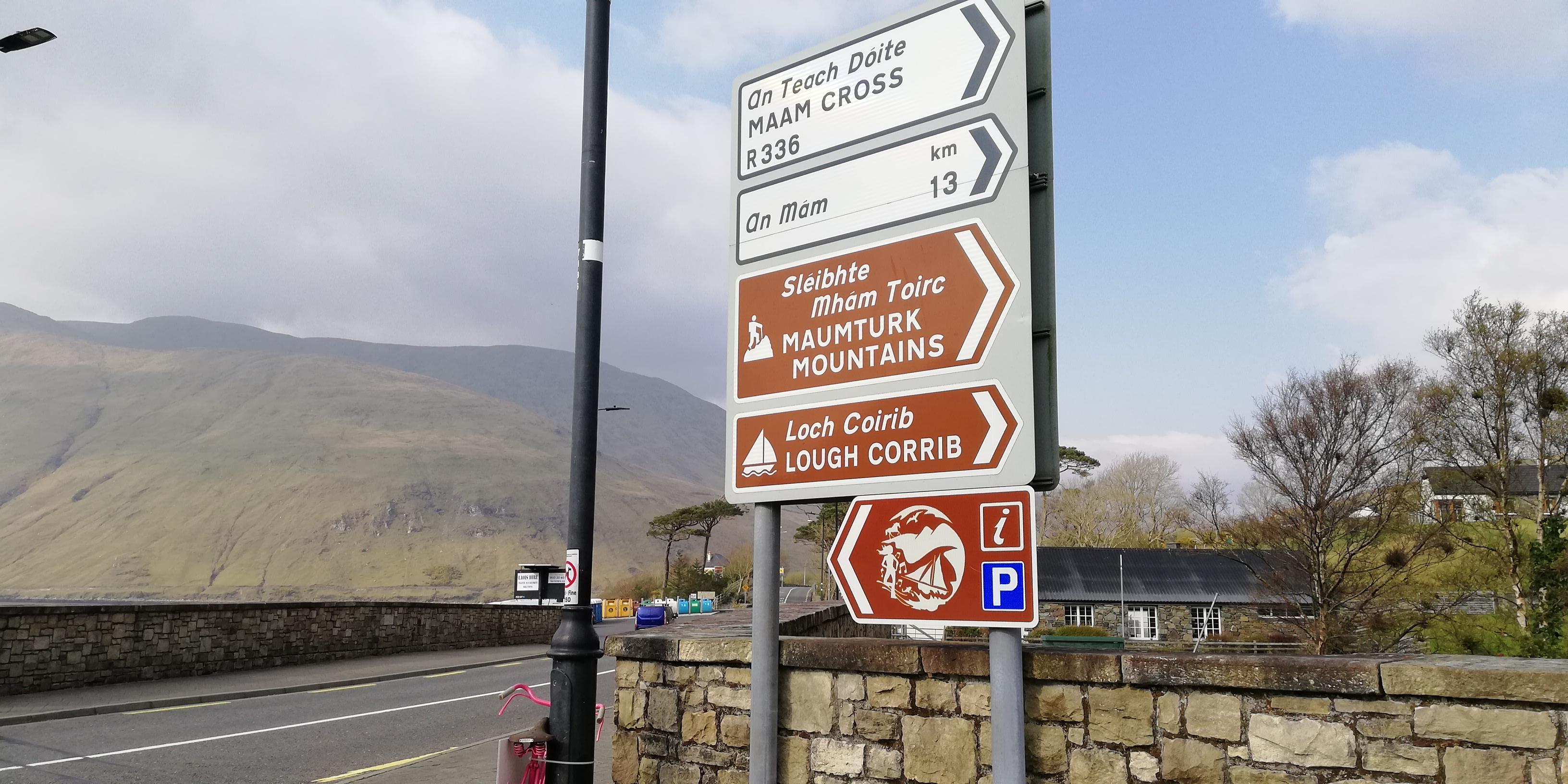 Galway was a breath of fresh air. The pace and intensity of the GO-GN seminars and #OER19 was no holiday, but it was invigorating nonetheless. Walks under blue skies, comfy hotel, no domestic duties for a week, for me a change really is as good as a holiday. And most energising of all, reconnecting with old friends and making new ones.

Like Patricia of Maam. While I feel uncomfortable talking about how “open” I am, I feel right at home talking to Patricia (and GO-GN travel buddies) about the continuation of Irish language and local crafts practice as important continuation and representation of culture.  About teaching the school kids the traditional ways of dying wool and knitting local patterns, to keep it alive. We weren’t quilting this story, we were knitting it together out of shared curiosity and an opportunity presented by not needing to be anywhere else for a while. Of course, this is done over a Guinness in a one-pub one-shop town called Maam. I still can’t pronounce that, but no worries. At one point I thought, maybe we won’t leave this pub the whole day after all and that will be fine. But we did eventually leave. And I loved seeing all the bi-lingual road signs take a stand for local languages at every turn on them there green hills towards the Connemara.

Like Kate Bowles. We catch up over the last breakfast at the Jury’s Inn, after an almost 5 year hiatus, during which time we went from office solidarity at Wollongong, to an unscheduled schism, and our own seperate mid-life crises. From which it seems we have both survived. Hallelujah.

Like Leo Havermann. Who I finally got to meet and whose blog post really nailed why I get this nervous twitch having to spend time defining “openness”. As a critical researcher, thinking powers the doing, open is a verb. I’m quite comfortable talking about how bi-lingual MOOCs can open up opportunities for under-served regional learners. (And I did that at OER19 and Martin Hawksey recorded it, thanks so much, and here it is. ) Here’s to the OER19 thinker-do-ers. Especially when the doing turns to activism, which is why I’m so energised by Bonnie Stewart’s Antigonish 2.0. And the whole #femedtech network.

But I’ve also written about why I no longer think “openness” is a thing, actually I think “openness determinism” is a problematic thing and I wrote about that too. And it worries me because while we’re being all inclusive and expanding our “open” to encompass any collaborative digital practice, then our “open” seems to be getting less and less distinctive. To the point where it’s getting quite easily absorbed by the mainstream higher education digital learning (eLearning, Technology Enhanced Learning, ODL, call it what you will). Is it a win for higher education to absorb and assimilate “open” (and our gift labour) as the latest innovation feeding the hungry marketised university that Kate Bowles spoke so eloquently about? Is it a problem if not only the practice, but the research field of open education becomes inseparable with mainstream higher education digital learning research?

I’m tending to think that it is. I’m tending to think that keeping open education distinctive is a good thing. And in my definitions paper, I suggested that a social-justice orientation to the research and practice might be one way to do that. OER19 had lots of people talking/doing/researching social justice and it was re-affirming to be amongst my people.

I was also very moved by calls for kindness, and of Kate’s Ethic of Care. And of Jim’s technology in service of People.​

But what I loved most about OER19 was that it opened up the possibility of another kind of distinctive strength – our interdisciplinarity. At OER19 we had cultural historians, sociologists, philosophers, environmentalists, mathematicians and more – all bringing in new conceptual frameworks from their particular fields.

Back at home, I am confronted with giant yellow electioneering posters urging our voters to “Make Australia Great Again”. Both offensive and unoriginal. It may as well say “Make Australia White Again” . (Hey Johanna, how about “Make Aboriginal Knowledge Systems Great Again”, that would be really cool.)

It was Su-ming Khoo’s interdisciplinary possibility of post-colonial repair that really rocked me and helped me make the leap. I don’t want to keep returning to a dominant “openness” discourse that has I feel (amongst other things) been the good intentions paving the road to hell (ie digital inequality and marginalisation of alternatives). So rather than paper over the cracks with more institutionally palatable innovation and quality narratives, how about we go for some Kintsugi. Not making a perfect repair, but acknowledging the cracks and making something more beautiful anyway. Perhaps through our interdisciplinary imaginings, we can Not Make Open Great Again, but patch and knit an open education that is Kinder and Fairer. And in the process, perhaps we can also make it somewhat more Distinctive.